The Smoking Gun Of Tattoo Removal 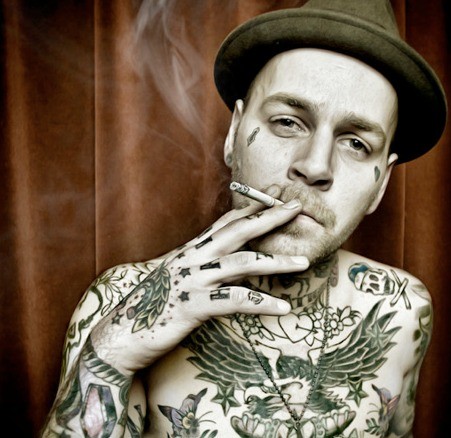 Research from a study that ran from 1995 -2010 has demonstrated that removing ink using a Q Switched laser from a smoker can be quite problematic… the smoking gun of tattoo removal.

In one of the first studies to examine the issue, researchers in Italy identified key characteristics of successful tattoo removal. Along with finding that large tattoos are harder to remove than small ones, and that yellow, blue, and green dyes are more resistant to laser tattoo removal than black and red ones, they also found that laser tattoo removal on smokers is significantly less successful than on non-smokers.

Study co-author and dermatologist Luigi Naldi, MD conducted the study on 352 patients. Doctor Naldi and his colleagues found that smokers got far less satisfactory results than non-smokers. Over the course of 10 treatments, smokers experienced an almost 70 per cent reduced positive outcome of tattoo removal than non-smokers. Researchers assumed that this poor outcome is caused by the impact smoking has on a person’s inflammatory and immune responses.

Researchers evaluated 352 patients (median age, 30 years; 201 men) with tattoos at a referral centre in Milan, Italy, from 1995 through 2010. Patients were treated with Q-switched 1064/532-nm Nd:YAG and 755-nm alexandrite lasers according to tattoo colors. Treatments were scheduled at 6 weeks or longer apart. Other than hypochromia or skin darkening, tattoo removal without additional adverse effects was considered successful. Tattoos had a median age of 4 years, were 50.5 cm2 and had a median of one color (range 1-7). They were located on the limbs (48%), trunk (44.9%), or face and neck (7.1%).

Cumulative removal success rates were 47.2% (95% CI, 41.8%-52.5%) after 10 sessions and 74.8% (95% CI, 68.9%-80.7%) after 15 sessions. Investigators found the chance of achieving removal after 10 treatments declined by 69.7% for smokers compared with non-smokers and by 79.5% for tattoos other than black or red. Other factors associated with reduced clinical response were a tattoo larger than 30 cm2, tattoos located on the feet or legs, tattoos older than 3 years, high color density, an interval between treatment sessions of 8 weeks or less and development of a darkening phenomenon.

Dr Luigi Naldi stated, “The clinical results of tattoo removal may vary greatly from one patient to another. Two findings may be surprising and point to the cellular mechanisms involved with tattoo removal, the less satisfactory results obtained in people who smoke cigarettes and the better results obtained with long intervals between treatment sessions [intervals longer than 8 weeks].”

Dr Naldi also said. “Once fragmented by the laser, pigment particles are cleared by cells. These cells need time to work properly, and substances contained in cigarette smoke may affect their activity.”

“We find that clients that look after themselves and are physically fit achieve fast results especially if they are teetotal. The local fighter’s gym (boxing gym) supplies us with many clients and the guys and girls have their tattoos removed incredibly fast more often than not. Obviously skin type etc. still has an effect, but if they work out regularly and don’t drink alcohol the results are generally amazing. It’s when you get clients that say they’re fit and hardly drink, then you find out they don’t ever set foot in a gym and that they smoke and drink regularly, that it’s slow”. Paul Davis, Skin Beautiful. www.skinbeautiful.co.ul

This podcast covered the subject of laser tattoo removal and smokers. You might like to take a listen.

One other consideration is that the research as pertaining to smoking and tattoo removal was undertaken quite some time ago, and there have been considerable improvements in laser technology since the research, so even smokers may find their laser tattoo removal outcomes have also improved. Maybe it is time to do another study?

Want to know more? Make a booking for a consultation with us and we can talk about all things laser tattoo removal. You may also like to join our Facebook page to keep up with others that are going through the laser tattoo removal journey. You can also email me on helena@tattooremovalauckland.com or text or phone on 021905990